Order "In That Number" at ReganBurke.com

House sparrows have been chirping at my window. They’re abundant on my city street and in the spring they emerge from their winter hiding places looking for food. Last year for the first time, European starlings appeared. Sometimes I think I hear robins and cardinals but starlings mimic the sounds of other birds. They’re trying to trick me into putting bird seed out for the more colorful birds, not knowing I love them equally.

Gutsy red-winged blackbirds abruptly premiered on the railing of my balcony, sucking the breath out of me. Their distinctive one-second long, loud musical trill called me from the breakfast table. Jet black bodies shouldered with red and yellow feathers held on fearlessly as I moved closer to the window. For years I’ve had black furniture with red and yellow highlights, imitating red-winged blackbirds.

A friend called from Florida to say Happy Easter as I was tethering Henry for his morning walk.

“Yes! It’s Easter,” and we laughed in that old familiar way, like we just discovered each of our days slips from one to another like egg after egg slipping into boiling water. We starting talking about the Shutdown. I extended Henry’s walk farther along Lake Shore Drive sensing a longer iPhone conversation.

“I can’t watch the news. Can’t talk about him,” she said.

I understand, of course. It’s what we all say and like all of us, she ended up talking about it anyway—said the Democrats need to present an answer to the question “why” to win in November.

“The Democrats have moved their convention to August about the same time as my book release,” I said. “Let’s go to Milwaukee and sell books out of the trunk of the car, a trunk show!” We’ve had such adventures in the past, but plans cannot be made until the Shutdown is resolved.

The outside world has been a physical threat since St. Patrick’s Day. At first I was in danger of someone sneezing on me. I’m in the vulnerable group. Now others are in danger of me sneezing on them. I may be an asymptomatic coronavirus carrier.

Henry and I ended up sitting in the bus stop sheltered by an unexpected spring warmth. 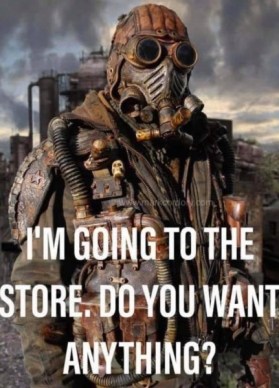 Walkers have taken to the street lately because the sidewalks aren’t wide enough to keep the reqiured social distancing. A woman in an ominous medical mask, six feet into the street, walked by and gave me a long evil eye. I’ve been wearing a cowgirl bandana for my mask and I neglected to re-cover my face after it slipped down when I was on the phone. Shaming eyes have replaced smiles and waves on the street. Watch out if you forget your mask. You’ll need to mend your wounds with a Brene Brown Ted Talk on shame from the daggers shooting out of your neighbors’ gaze.

The Stay Home battle cry presents no threat though. Settling into social isolation, I watch masked neighbors from the window.

And I pray for a visitation from the woodpecker I heard the other day.