In late summer 1962, I ran away from home; away from my mother, away from my three sisters, and away from our year-round Jersey Shore beach house. My mother had left my father a few years before, after we were evicted from a mid-century-modern in the Chicago suburbs.

I loved moving close to the Atlantic Ocean but not even the beloved beach down the block could keep me from escaping from my mother’s uncontrollable, screeching, violent rampages. I fled to my father, two hours away in Manhattan. He’d moved there to be close to us and to try, once again, to stay sober. My mother suspended her hatred long enough to allow a few visits between us, but when he moved into a new girlfriend’s suite in the Delmonico Hotel on Park Avenue, my mother cut off all communication with him.

When I arrived, he checked me into my own hotel room, across the hall from his and the girlfriend’s suite. I enrolled in the sophomore class at Marymount Fifth Avenue Catholic girls school, where I became fast friends with another girl who lived in a hotel—her father managed the Waldorf-Astoria. I was no stranger to hotel living. My family had lived in the Meridian Hotel in Indianapolis for a year when my parents were drinking round-the-clock and couldn’t pull it together to find a family home. At 8-years-old, I had learned to run a tab for grilled cheese sandwiches and Coca-Colas in the hotel coffee shop. I relied on the doorman to report my whereabouts to my parents when I went out to play, since they weren’t always available to ask permission. I loved that part.

In early December at the Delmonico, I woke to a fiery, closed throat and vice-gripping headache. I went by ambulance to the emergency room of New York Presbyterian Hospital and was diagnosed with mononucleosis, hepatitis and migraine. The doctor explained that mononucleosis is called the kissing disease because it’s transmitted by mouth. Oh shit. Shame ran in my veins alongside the debilitating virus. I was afraid everyone would find out I was kissing a lot of boys and having sex.

Treatment included nausea-producing morphine injections and steroids. To heal my inflamed liver I lay flat on my back for 30 days— through Christmas and New Year’s. Classmates from Marymount brought homework; friends from the Jersey Shore sneaked in beer; my Boston boyfriend came with a stuffed Wiley Coyote; a case of Reese’s Peanut Butter Cups showed up from my cousin,Therese. My mother never visited nor called. 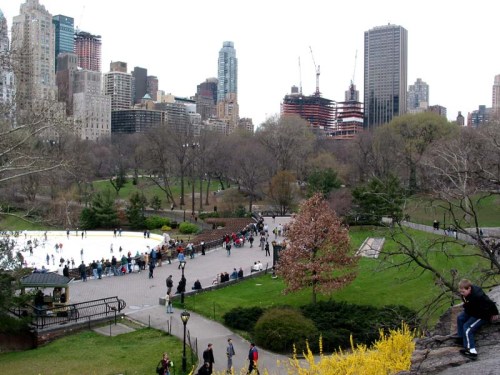 While I was in  the hospital my father rented a furnished 3-bedroom apartment
overlooking the Wollman Skating Rink in Central Park. Prolonged bedrest in the new home led to my recovery. The compulsory homework necessary for me to move on to my junior year slipped from my hands and onto the floor as I slept off my diseases. I returned to school after four months and failed that year with a final average grade of a humiliating 34.

Regan Burke Order Regan Burke's new book, "In That Number" from your favorite bookstore or at https://reganburke.com. Regan's brief memoirs and personal essays appear in the Christian Science Monitor, Sun Magazine, Chicago History Museum "In This Together" Project, City Creatures, Safe 'n Sound, Easter Seals Blog. Chaleur, Rise Up Review, Bird Garden's Murder of Writers and Writing Out Loud. She lives on Potawatomi land in downtown Chicago. Her main activity is reducing the weight of the here and now.
Published June 21, 2017June 26, 2017

5 thoughts on “Suffering the Consequences”