Pre-order new book, "In That Number" at ReganBurke.com

Irish DNA seems to have a gene actively predisposed to alcoholism though there’s no scientific evidence that it’s hereditary.

The first ugly secret in my family is that my twenty-three year old mother, Agnes Donnelly Ryan Burke, was drunk in the Georgetown Inn in Washington with my father at the time her mother died. She wasn’t located until the next day. Later that year my parents were married in Key West where my father, Bill, flew reconnaissance planes across the Florida Straits to Cuba. Their married life began with Bill spending two weeks in the brig after a drunken brawl over Agnes.

Alcohol addiction begins with an immature reaction to the emotional and physical pain of adverse childhood and young adult experiences. When and why did Agnes and Bill cross over from heavy drinking to alcohol disease? Bill’s mother died when he was three so he had early trauma. Agnes was prescribed Guinness Stout when she was twelve for anemia so she had early permission. Their chaotic, calamitous alcoholic marriage intruded on the childhoods of my three sisters and me but as far as I know we are not all alcoholics. We all manifest common characteristics of growing up in an alcoholic home: fear of emotions, conflict avoidance, perfectionism, compulsive behavior, depression, melodrama, overreaction to change, and the denial of all these traits and their connection to alcoholism.

In the forty-one years I’ve been in Alcoholics Anonymous, there have been ongoing, persistent discussions, “Is it hereditary? Is it a disease?” Since the1900’s the language describing alcoholism has screamed out to the non-addicted populace, WE CAN’T HELP IT. The world has been given plenty of messages to enable it to accept us alcoholics as normal people with medical problems. Currently, the community that studies these questions is 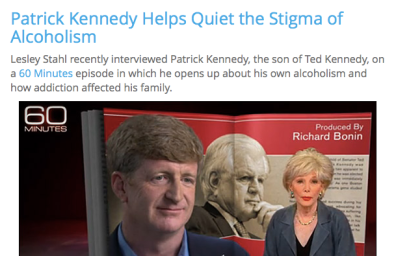 promulgating the idea that addiction is a biological disorder from a dysfunctional brain – not inherited and certainly not a moral failing.

This past year I had coffee after church with a new acquaintance. In swapping little tales about ourselves she told me she had a match.com date who told her he was in AA. “Isn’t that disgusting?” she said. I abruptly excused myself saying I had forgotten to walk my dog and had to run right home.

Alcoholism was shameful before I was born, shameful in my family growing up, shameful in myself, and shameful now. All the work that has gone into trying to change negative thinking against alcoholics has not shifted the stigma one iota. Two million recovering alcoholics still sneak off to life-changing, life-saving AA meetings, keeping their recovery a shameful secret.

Agnes died of alcoholic brain syndrome (wet brain) when she was seventy. Bill joined AA when he was forty-five and stayed sober for 35 years until he died. He was proud to be part of a recovery community and thrived by helping others. But he never felt as though he quite measured up to the world outside of the AA fellowship. He wasn’t secretive about his alcoholism, nonetheless, the stigma hounded him until the end.