As we reached for the Iberian cured ham and tomato bread, we jerked back in our seats when someone shouted “call an ambulance!” Our boss had an asthma attack and we followed him to the Figueres hospital. The restaurant, El Motel, 90 miles north of Barcelona and 40 miles south of the French border inspired the most famous chef in the world, Ferran Adrià to create his restaurant, El Bulli in nearby Cadaques on the Mediterranean Sea.

In the weeks before, my three colleagues and I traveled from our office at the U.S. Department of Education in Washington, D.C. on official business to Barcelona, we vowed to eat at the celebrated El Motel restaurant. I arrived a week before Secretary Richard Riley and his staff to arrange the logistics for the conference events and to find a typical Catalan school for the Secretary to tour. Serendipitously, a principal formally invited the U.S. Secretary of Education to visit her school in the dusty country between Barcelona and Figueres. The children celebrated him with an American musical performance that added hours to our day. With official business out of the way, we headed for the Salvador Dali Museum in Figueres. My colleagues, John Funderburk, Jay Blanchard and David Frank stewed in anticipation of lunch at the table of chef Jaume Subiros.

Dali said of his museum, “The people who come to see it will leave with the sensation of having had a theatrical dream.” At first glance his entrance looks like a quaint three-story red

clay castle. Looking atop the turret one sees huge cement eggs. The exterior walls are peppered with what foreigners think are baked dinner rolls, but Catalonians know the scatological Dali created the organic sculptures to resemble excrement pies. The aphrodisiacs inside include Dali’s surrealistic art, holograms, a vintage inter 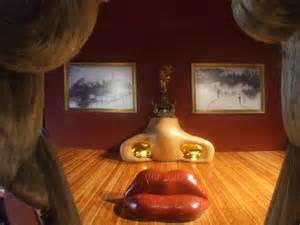 active Cadillac and his crypt. We frittered away longer than planned and in the end found Secretary Riley and his wife, “Tunky”, resting in the Mae West living room.

Drenched in Dali elixir and blanched by a long day in Catalonia without sustenance we made our way north on the Avenida de Salvador Dali away from the “theatrical dream” and toward the gastronomical paradise of El Motel. The U.S. consulate in Barcelona booked our table and we were greeted with all the ruffles and flourishes of royalty. Low blood sugar and parched

thirst dragged us to a round table full of tea roses and peonies overlooking the dry Spanish countryside. Yes, yes! We agreed to start with plates of Iberian ham. The shared plates would dish up seafood croquettes; rice with sea cucumbers, rabbit and sausage; clams with candied tomato & lemon grass. The chef had prepared fresh Catalan custard for dessert.

As the Iberian ham was placed before me I looked up in horror to see Secretary Riley turning beet red, struggling to breathe. He recovered overnight in the Figueres hospital. In our Barcelona hotel the following day we were comforted with simple ham and cheese sandwiches before leaving for the airport.

Regan Burke Regan Burke's first book, " In That Number", is due from Tortoise Books in October 2020. Her brief memoirs and personal essays appear in the Christian Science Monitor, Sun Magazine, Chicago History Museum "In This Together" Project, City Creatures, Safe 'n Sound, Easter Seals Blog. Chaleur, Rise Up Review, Bird Garden's Murder of Writers and Writing Out Loud. She lives on Potawatomi land in downtown Chicago. Her main activity is reducing the weight of the here and now.
Published June 7, 2016February 20, 2017