I knew I was in trouble as soon as I responded to a reporter about presidential candidate Gary Hart.

I was in Denver working on Hart’s campaign in May 1987 when The Miami Herald front-paged a photo of Hart in Bimini aboard the sailboat, Monkey Business, with a blonde beauty on his lap. Hart tried to conduct a normal campaign, but after a week of hounding from the media for answers to questions about his extramarital affairs, he dropped out of his race for President.

When the Hart campaign folded, I dispirited myself away to Indianapolis to manage an unpromising U.S. Senate campaign. I should have gone home to Chicago to look for a job there instead.

Six months later, Gary Hart changed his mind and started working his way back into the race. The day before Thanksgiving I was contacted by a reporter from the Gary Post-Tribune for a comment about the rumor that Hart was getting back in. My friend, Roger Ebert, a newspaperman for the Chicago Sun-Times, always cautioned me in my political work to never talk to the press.

“You’ll just screw yourself,” he said. “They’re out to trip you up.”

I heeded his advice religiously until this particular reporter caught me off guard. I picked up the phone on my way out the door to Roger’s vacation house in Michigan. I’d been invited to Roger’s legendary Thanksgiving party in 1987 and was looking forward to a weekend of great food, real characters and loads of laughs. I never gave the reporter’s call another thought.

Roger Ebert loved people. He bought successively bigger houses in Michigan to accommodate weekend guests. During those weekends we’d take caravan excursions to the used book store in Niles and to art and antique stores in Lakeside. At home we played poker and watched movies. In his well-stocked kitchen everyone chipped in to make big family style meals. Roger told the same funny stories over and over. I was his biggest audience and his biggest target. He teased me relentlessly about all my losing campaigns.

“If you wanna place winning bets on who’s gonna lose, find out who Regan’s working for,” he’d say to any gathering.

On that Saturday Roger returned from the store in New Buffalo with the Sunday papers, bagels and cream cheese. Someone brewed up a pot of coffee and the weekenders gathered at the big old dining room table. All of a sudden Roger screamed that I was on 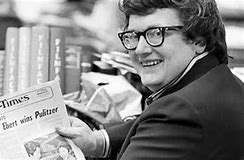 the front page of the Gary Post-Tribune. When he read the quote aloud, he laughed so hard he could hardly spit it out.

“It’s his (Hart’s) swan song. This is like a lover who woos you, then dumps you, then comes back, asks forgiveness, woos you again and dumps you again. I’m not falling for it.” Said I.

I never lived it down. For the rest of the day, all the next day and nearly every time I saw Roger for years afterwards he recited my quote.

Gary Hart did get back in the race. And I did help him get on the ballot in Illinois. He got four per cent of the vote in New Hampshire, then dropped out again.

My candidate in Indiana lost.

But I gave Roger one big priceless punch line.

Regan Burke Regan Burke's first book, " In That Number", is due from Tortoise Books in August 2020. Her brief memoirs and personal essays appear in the Christian Science Monitor, Sun Magazine, City Creatures, Safe 'n Sound, Easter Seals Blog. Chaleur, Rise Up Review, Bird Garden's Murder of Writers and Writing Out Loud. She lives on Potawatomi land in downtown Chicago. Her main activity is reducing the weight of the here and now.
Published April 25, 2019May 2, 2019

2 thoughts on “Screwed by Gary Hart”