When the attendant told me I was at the wrong gate, I froze. I’d been at Midway Airport for two hours waiting to fly to Salt Lake City for my granddaughter’s 2018 graduate school graduation. My vision blurred, my legs shook and I gaped at him without speaking. I actually couldn’t hear him. Someone grabbed my arm and raced me over to the correct gate just before the jetway closed. Inside the plane, I was escorted to Row A
where they keep an eye on people. 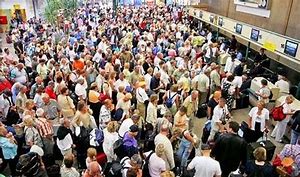 I traveled twice more that summer. Once I was in the wrong TSA line, so confused that a stranger brought me to where I needed to go, again. I’ve since developed a phobia, thanks to nightmarish remembrances of Tom Hanks in the movie Terminal—about a man who lives in the airport after he is denied entry into the US.

A friend who works for O’Hare tells me airport workers regularly experience confused old people wandering around lost and panicked. I’ve traveled a lot in my life but familiarity with airport commotion holds no weight now.

When I first retired, I was unsympathetic to people with cognitive disorders. I joined the morning exercise classes at church but not to make friends. I told myself I wasn’t like those old people. Well, those old people have subsequently shown me how to be old, have compassion for those who talk slower than I do, who will never remember my name nor I theirs, nor the title of the book we just read or the movie we all saw. Our get-

togethers are often hilarious games of 20 Questions where we all guess what someone is trying to remember.

There’s just not enough room for all the bits lodged in my aging brain. A mysterious natural phenomena controls the shedding and changing of my grey matter, like menstruation and menopause in my body. Trouble is, the shedding seems to be more active these days. Oh sure, curiosity fills my brain with new information but its cells refuse to let those memories form and what I learned yesterday is soon forgotten.

One technique I use to block braincell destroyers is to ignore anxiety-producing articles that say cognitive decline slows if I eliminate sugar or learn chess. Perhaps the content is correct, but I’m possessed of my own version of old age, not a researcher’s cookie-cutter version. Similarly, I cast off brain-shrinking agitations delivered by younger friends who tsk me for walking too slow or for asking them to speak up.

However, I love music so I responded to an article about choir singing strengthening the memory and joined the Good Memories Choir. Singing won’t get me back in airports, but learning music keeps me attached to the real world. In Bradley Cooper’s remake of A Star Is Born, Lady Gaga sings about the love of the two main characters as “far from the shallow now,” as if the brain has no choice but to deepen the couple’s experience. In my case, like the reversed flow of the Chicago River, I have no choice but to spill out of the deep and into the shallow now.

For those who don’t understand my title, I give you, with love, Shallow

9 thoughts on “Shallow, I’m Into The Sha-la-la-low Now”