I Got My Country Back.

Weeks after the January 2017 presidential inauguration and Women’s March, I met with a group of women who look like me—old, white, middle-class—to discuss what we could do to help right our country. We devised a plan based on the Indivisible Handbook: meeting monthly to report on our calls and letters to elected officials stating our opinions about Cabinet secretaries, legislation and impeaching the President. We all decided the most impact we could make was to help turn the Sixth Congressional District blue, ousting six-term incumbent Republican Peter Roskam at the midterm election in 2018.

Cries at 2016 post-election presidential rallies to “lock her up,” a demand to jail Hillary Clinton awakened us to a cruel reality. This America, our country, had turned overnight into a place we’d only seen in movies like Elmer Gantry and footage from 1920’s Ku Klux Klan rallies. Little by little we discovered some of our friends, neighbors and family members had voted for a man who gloried in grabbing women by the genitals and calling immigrants murderers and rapists. At first I wondered how people could be so duped by the Reality Show President. I slowly came to realize not all are fooled. People who look like me actually like his white nationalist agenda. Yep. They like him, a tells-it-like-it-is guy, no matter how crude or criminal. I dismayed.

My enthusiasm, and that of my activist friends, turned pessimistic as we drew closer to the midterm election.

Sean Casten, an environmental scientist and political newcomer, won the Democratic primary for Congress in Illinois’ Sixth Congressional District over five women. The district includes some of Chicago’s wealthiest suburbs. I had never heard of him, knew nothing about him. But he became the object of my strongest desire.

I really wanted him to win.

The day after his November victory an interviewer asked Representative-elect Casten what he attributed his win to. Without hesitation he said, “The women. My sister, my wife, the women who showed up every day in the campaign office, the ones who phoned voters from home and knocked on doors. The women.”

Democrats took 35 seats and counting away from the Republicans in the 2018 midterm elections. And I got my country back. I live in a country where white suburban voters 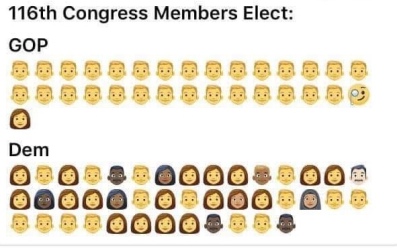 In my country, the saints are marching in.