My cousin Therese cleaned out the old dresser in the basement next to the washer and dryer after her mother died in 2001. She found a letter my mother had written in 1943 from Key West. My mother was 22 years old, married to my father, a Navy pilot.

The letter begins with sisterly reasoning about why she isn’t using her best writing paper. “As long as you’ve seen my good stationery, I’ve decided to use this stuff.”  She makes no apology about why she hasn’t written sooner: “Laziness accounts for all the weeks I haven’t written.”

My mother, Agnes, and her sister, Jean, were a year apart. They lived for a time at Georgetown Visitation College, an all-women convent school on the grounds of Georgetown University, where they met their husbands. In my mother’s letter to Jean, she gossips about former classmates. Dorothy Castle’s husband Ed was in the Navy’s “Sound School”, training to detect enemy submarines, and would soon be commanding a “sub chaser”. “Water Wings Haley, up in Miami, was waiting for a ship to get outfitted that he would command.”

She mentions that my father “will jump from Ensign to full Lt. if the Air Corps ever gets 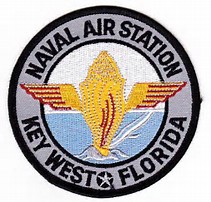 around to promotions.” And then she writes, “I personally don’t give a damn, but that’s all anyone talks about.”

Ah-ha! There’s the mother I knew, not giving a damn. And judging people who do–give a damn, that is.

She then reveals that my father’s mission, patrolling the Florida Straits between Key West and Cuba looking for German submarines, is a military secret. On liberty in Cuba, he and his fellow pilots acquire contraband —English gabardine, cigars and liquor. “We’ve become quite the rum and scotch ring. I’ve had to acquire a taste for Daiquiri’s because of the lack of gin,” she writes.

Next we read about her new bathing suit, her tan, the new officers’ club where “we have to bring in our own liquor because it’s on an Army Reservation.”

I have no idea how or when criminal activity became just another part of life to my mother, like clothes shopping or mixing a martini. Until I read her letter, I thought my father had influenced her. Her nonchalance on smuggling reminds me that she seamlessly taught me to shoplift from the A&P as a child and that she stole from her employers.

The second child of seven, she grew up in one house in Westfield, NJ where the children revered their successful father and adoring mother. Yet, like my father, she wasn’t governed by her conscience. My parents didn’t pay bills, cheated their friends and families and relied on midnight moves to escape rent-collecting landlords and hotel managers. They left me with a lifelong struggle “to give a damn.”

The day she died, I visited her last residence, a nursing home in Point Pleasant, NJ. Her closet overflowed with clothes she stole from other residents. The nurses said my mother expressed a lot of emotions in her dementia but guilt and shame were not among them.