Hal Lindsey’s end-times prophecies in The Late, Great Planet Earth, permeated the born-again, religious cult I joined in the early 1970’s in Toms River, New Jersey. There were about fifty of us—disparate spiritual seekers who accepted Jesus Christ as our personal 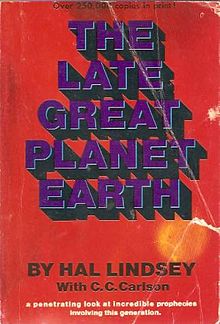 savior, a requirement for inclusion in the exclusive Fellowship. One of the elders had broken away from a local Plymouth Brethren Church and opened the basement of his family’s large, wooded, colonial home for Bible study and Sunday services for us blue-jeaned recovering addicts and alcoholics. As a newly sobered-up ex-hippie, full of self-loathing, all I wanted was to be accepted in that Fellowship.

Based on his interpretations of the Book of Revelations, Lindsey’s book sensationalized end-of-the-world Biblical prophecies connecting them to current events as proof of the coming Rapture where Christians would be taken up to heaven and avoid Armageddon. Satan’s plans to form a one-world government and religion, as prophesied, were triggered by the establishment of the state of Israel and the World Council of Churches—both in 1948. Everywhere I looked in those days I saw Lindsey’s signs of the end times: increase in the divorce rate, recreational drugs, new technology, the gasoline shortage, religious ecumenism, and the birth of the European Union.

Church elders directed every aspect of our lives. Men were the head of the household, women submitted to them and didn’t work. We lived in separate homes but were discouraged from socializing outside the Fellowship, lest we be influenced by secular humanist ideas, like having credit cards, one of Satan’s tools to create a global economy. We didn’t put our money in The Bank of America because the bank was seeking to legalize interstate branch banking, thereby centralizing all the country’s money into a single entity, another Satanic plan.

When my son joined Little League in the first grade, I sat away from the other parents in the bleachers fearing the wrath of God if I talked to anyone outside of the Fellowship. Church members scorned me for volunteering for Jimmy Carter for President in 1976, even though he was born-again.

After four years, I extricated myself from the Fellowship, left my abusive husband in New Jersey and drove my nine-year-old son 800 miles west to Chicago for a new life. A group of Christians at LaSalle Street Church who had experienced similar religious cults nursed me back to spiritual and emotional health. The ideas of Hal Lindsey dissipated into the ether of bad dreams and gradually I no longer looked for signs of the end times.

These words, and words of White House strategist Steve Bannon announcing a nationalistic government free from links to other countries remind me of Hal Lindsey’s warning to resist Satan’s plans for a global economy and one-world government.

Are they fighting a holy war?

2 thoughts on “Are We Getting Dragged Into Their Holy War?”