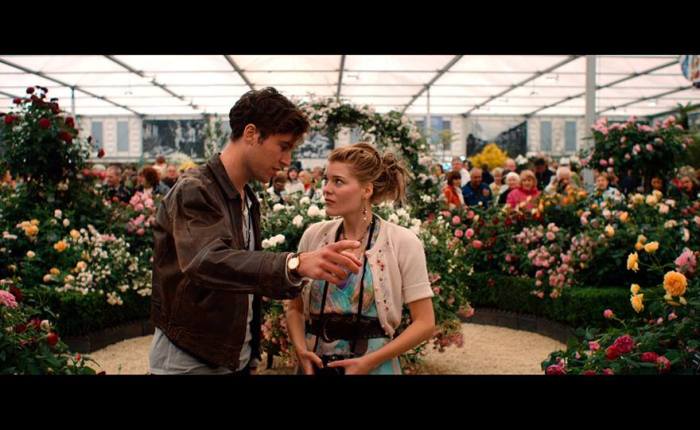 The elevator opened to a lit-up scene of human statues in the closed-for-business City Hall lobby.

I slinked back into the elevator, up to the 4th floor Elections Department and flew to the telephone in my office where, in the Saturday morning quiet, I had just finished the 1993 voter registration plan.

I called my high-rise neighbor, Vivienne de Courcy. “You have to come down here right now!”

“You must — they’re shooting a movie in the lobby. We can get access with my I.D.”  Vivienne and I loved sifting through the credits at the end of movies trying to figure out what everyone did, but we’d never been on a movie set.

Chicago’s City Hall squats on one city block with doors at Randolph, LaSalle, Washington, and Clark Streets. I hurried to the Washington Street side of the building down the stairs to the lobby. Flyers were posted in the stairwell: Lobby Closed Saturday Noon for Filming of The Fugitive. When did they put those up?

I ran down the hallway, shoved open the polished brass doors and caught my uninhibited, garrulous sidekick swinging her long legs out of a taxi on Washington Street.

Vivienne’s knockout looks never suffered from uncombed hair and no make-up. Flinging her camel-hair cape over her shoulder she shivered in the March wind, grabbed my arm and skipped inside. I muttered quick instructions: don’t embarrass me, don’t say a word, don’t make me laugh, do not get me in trouble.

Crew Only signs sat on food tables along the corridor. Perched at the table near the rotunda we hawk-eyed bowls of popcorn. Vivienne whispered her intuitive movie-credits knowledge. That’s the Director. Production Assistant. There’s the Script Supervisor. Which one is the Grip? Dunno.

A crew member gestured to the popcorn, assuming we were extras. Vivienne helped herself. What? Don’t do that!

And then, Action! Harrison Ford came running down the circa-1911 polished marble staircase across the wide rotunda zig-zagging through the crowd of extras I had witnessed by the elevators. Cut! He walked back upstairs. Action! He came running down again chased by Tommy Lee Jones.

Oh my god, he’s coming this way. “Vivienne! Say something!” Harrison Ford sauntered over to munch popcorn. I shoved Vivienne toward him. He said hello and she asked him how he liked Chicago.

“Is that an Irish accent?”

“Well, I love popcorn.”  He smiled and strolled away.

My starstruck legs wobbled. Back at my side with a handful of popcorn, Vivienne shimmered. Turning toward the exit we faced crew and extras gathered for the catered lunch behind us.

“Are you two extras? What’s that I.D. around your neck?”

We skedaddled down the hallway, fluttered out the doors and whooped it up all the way home.

Vivienne de Courcy’s first feature length movie. “Dare to be Wild” is premiering at the Palm Beach Film Festival in April, 2016. She currently resides in Ireland and London.