Since 9/11, the popular vertical shopping center, Water Tower Place and its neighbor, the ninety-one story John Hancock Tower have been considered prime targets for potential terrorist attacks. The Quiet Room in the back of the food court at Water Tower Place, is a good self-service meeting place to carry on business. My group wasn’t thinking much about terrorists last week when we met over chocolate covered pretzels to discuss how to prevent cars from crashing into pedestrians on North Michigan Avenue. Indeed, the locals have allowed its terrorist fears to slip into a collective sub-awareness. We’re alert but we go out to lunch.

One of the food workers nervously approached our table.

“I’m sorry to bother you, but you’ll have to leave. They’re evacuating the building.”

It was the week the President of the United States ordered an Air Force pilot in Nevada to launch a Hellfire missile from a Reaper drone hovering over a car in the Baghdad airport. The target: a high-ranking Iranian general.

We bagged our notebooks, brochures and cell phones and hustled out of the already deserted building. Out on the sidewalk I fast-walked away from the building and was almost knocked over by men and women running toward the building. Plainclothes. The neighborhood is loaded with plainclothes cops. I spot them once in a while tearing after shoplifters, drug dealers and car jackers. I’m sensitive to the look of them, having been a protester all my life. They infiltrate protest marches.

The same week, a spate of robberies a block away from Water Tower Place put the neighbors on edge. Teenagers were accosting pedestrians, stealing their belongings and fleeing in an awaiting white SUV that sped off down Lake Shore Drive. Life in the big city has always included an awareness that criminals are lurking about but this was different. One women was robbed of her bundles while walking her dog at ten o’clock in the morning. (Do you suppose one of those bundles was a plastic bag full of dog poop?)

Then a man walked into the nearby Emergency Room reporting a coyote had bitten him on the butt on the sidewalk in front of the hospital. Photos and videos of a limping coyote 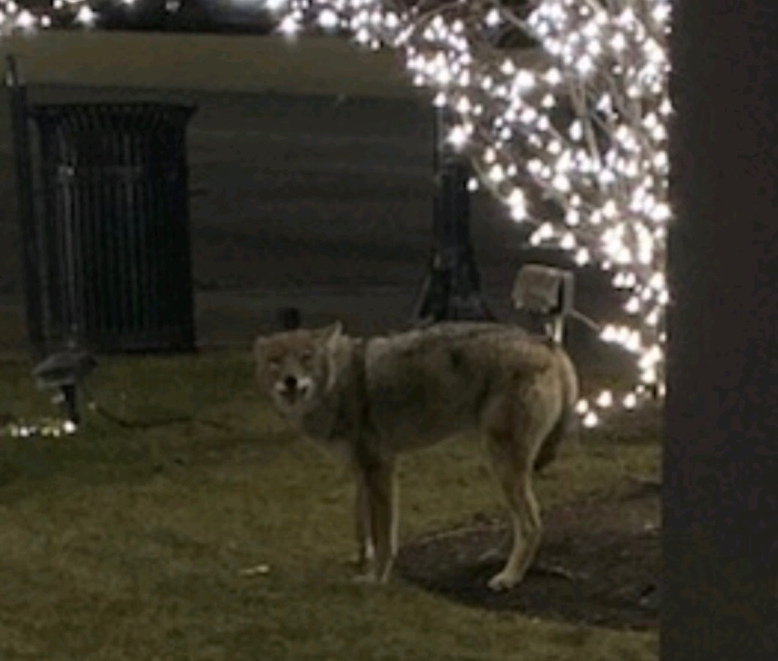 popped up all over neighborhood blogs. The idea of an attacking coyote hiding in the shadows drove us all crazy. Lincoln Park High School even locked the students inside because a coyote was spotted in adjacent Oz Park.

Sunday morning at the end of the hair-raising week, I danced down the aisle to my church pew as all 8,000 pipes in the Aeolian Skinner organ blew out a rendition of Shall We Gather by the River. The sound stopped abruptly as if someone had pulled the plug. Was the organ broken? What could possibly happen next?

Street robberies have been foiled in the neighborhood by the increased presence of the Chicago Police. The bomb scare in the Water Tower was a hoax. Chicago Animal Control announced they caught, tagged and released the limping coyote into the Cook County Forest Preserve (I suspect he’ll be back) and the church organ was plugged back in.

I’m discomforted by the powerlessness over my environs, but I’ve moved beyond waiting for the other shoe to drop.

Through many dangers, toils, and snares

We have already come.

And Grace will lead us home.

Have a listen-Judy Collins Amazing Grace

Regan Burke Regan Burke's first book, " In That Number", is due from Tortoise Books in August 2020. Her brief memoirs and personal essays appear in the Christian Science Monitor, Sun Magazine, City Creatures, Safe 'n Sound, Easter Seals Blog. Chaleur, Rise Up Review, Bird Garden's Murder of Writers and Writing Out Loud. She lives on Potawatomi land in downtown Chicago. Her main activity is reducing the weight of the here and now.
Published January 16, 2020February 7, 2020

9 thoughts on “Dangers, Toils and Snares”